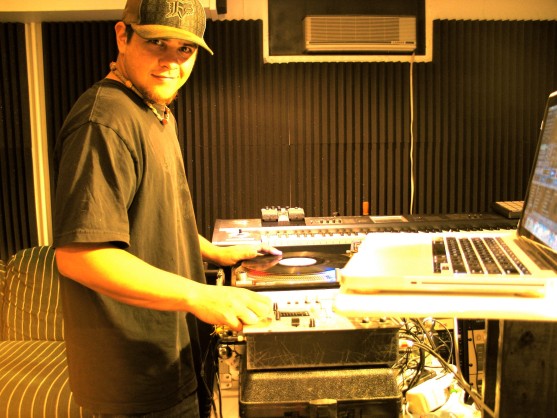 Tim Icculus Dunning, aka DJ Icculus, is an alto Saxophone player and a DJ whose turntable skills have landed him several festival spots in the last few years. He is from Lawrence MA and currently is involved with 3 bands as welll, The Romano Project, Blanket Party and a yet unnamed project featuring former members of Manifest.

How would you describe your method when it comes to being a musician?
Well, as a musician, its just how much of an artist and and how much of an entertainer do you want to be?  Ya know I think the right mix is coming up the middle road, that’s sorta been my philosphy with it. I like to put my own spin on things but I really like to get people involved, get ‘em to relate, get ‘em to move man.  It should be part studied and part danced, not all one or the other.
What’s your favorite memory that happened to you in context of your musical career?
Oh man, I’d have to say probably, I don’t know if you’re familiar with Mitch Candiano and 182 Productions, he miracled me into a festival on my birthday, one year, and it was great things festival – and there was no djs after the acts and sortof a very casual lot, so i was able to set up my equipment at probably one of the coolest [little guerrilla?] days of my life.
What’s the most significant achievement of your most recent group?
I think being called to do Bella Terra maybe half a month before it went on, ‘cause the guy sponsoring it heard my stuff and he gave me a really great slot, it was like Saturday night at 2am or something like that.  Dynamite spot, I took that as a compliment, he really rushed me onto his list, it’s a really hard thing to get into.
What venues in your region do you recommend to artists and fans alike and why?
Well as far as Bars – Wally’s has the coolest stage around here, up there in Hampton, I do like Stone Church a lot, Stone Church is a very cool venue.   I don’t know there’s so many it’s hard to keep track of them.  Stella Blues is also a very cool place, that’s in New Haven.  Any festival you can get into in this area, Strangecreek, Wormtowm.
What musical groups do you think people should find out about if they haven’t heard of them yet?
I don’t know if I can tell you that, that’s kind-of a trade secret. [laughter]  Oh man, I have caught Pidgeons playing ping pong, a bunch of times this festival season, they’re doing it for me very much.  Viral Sound, they’re doing it really good right now.
Anything in particular you’d like to promote right now regarding your own projects?
There’s definitely gonna be a new Romano Project EP coming out very soon, as well as I have a couple of new CDs myself.   One is called the Thank You mix tape the other one is kindof still in the works I don’t have a name for it yet but its pretty cool.
What is the greatest song you can think of right now and what do you like about it?
Oh god.  [laughs] I think the greatest song right now when you ask me that question it’s Awolnation – Nights of Shame, just for the splendid, splendid cross-genre mix – he knows just how to do it with textures, pretty sure its just one guy.  I like that song.