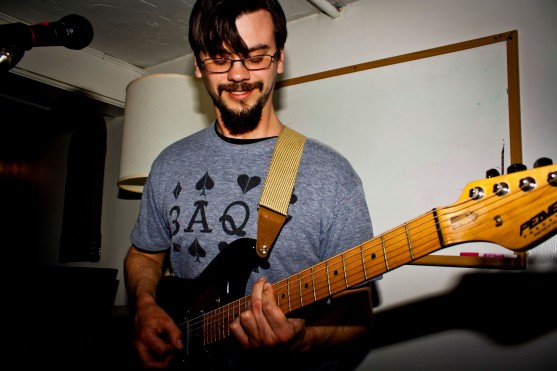 Christopher Michael Jacques is a guitarist from Quincy, MA.  He currently is involved with Progressive Jam Rock Band People With Instruments.

How would you describe your method when it comes to being a musician?
It’s about challenging yourself. Even though I know no matter what there’s always someone better then you, it’s not about actually getting there. it’s about striving to be the absolute best.  It’s the only way you get to be your best. It’s about trying reach things; writing, playing, improv, by yourself or as a group that is simply beyond you. And reach FAR.
What’s your favorite memory that happened to you in context of your musical career?
I’m lucky that I play with my best friends. Every memory with these guys on stage is special in its own unique way.  But most recently it was when our new drummer Brandon Mayes came in on his first writing session with us.  We were all so excited to be working on the stuff we were working on. But, that’s the moment I trace our current momentum back to.  It felt like something was starting.
What’s the most significant achievement of your most recent group?
I don’t know, staying a band for 5 years seems like a pretty great achievement in the industry these days.
What venues in your region do you recommend to artists and fans alike and why?
Well, we’ve played Church of Boston and Precinct Bar in Somerville a lot.  And there’s a reason we keep going back there. Great beer selection. Of course there’s also the quality sound reinforcement, awesome staff.  The scenes in Boston are tough to keep up with sometimes, but those two clubs have always been a home for People with Instruments and the whole scene.
What musical groups do you think people should find out about if they haven’t heard of them yet?
Turkuaz, Ellis Ashbrook, Timbre Coup, Mister F, Balkun Brothers Blues Band, and Strange Changes… Go see that band immediately.  Those guys are family.  One of their members, Geoff Nielsen, produced our last record and is at the board for us again on the new releases we’re working on.
What is the greatest song you can think of right now and what do you like about it?
Rain Song Led Zeppelin.  The first 5 minutes of the song come to an explosion of some of the most serene and powerful composition I’ve heard.  It’s an incredibly romantic representation of rain musically.  And the outro is just a stunning example of how beautiful of an instrument the guitar can be.