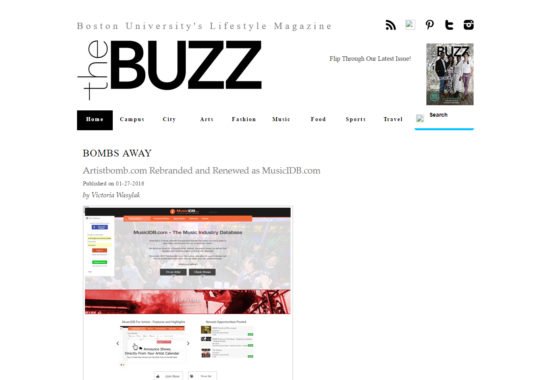 This article originally appeared in the BU Buzz

Concept: Google, but for searching for local gig opportunities. Ask any local musician what the key to gaining a solid following in their hometown is and they’ll tell you it’s the often painstaking process of playing just the right amount of shows.
Grassroots startup website MusicIDB.com, formerly Artistbomb.com, was created for just that – helping local artists navigate show opportunities without the hassle of individually messaging every venue in a 20 mile radius on Facebook.

MusicIDB.com was rebranded in 2016 to not only drop fees for messaging between bookers and artists, but to improve the overall experience and hone in on the site’s goal of fostering connections in local music communities.

“For us, it feels really great to tell people we’re building the Music Industry Database, which is MusicIDB.com,” Brian Bahia, cofounder and CEO of the site, said.

Through MusicIDB, artists can upload any important information to their profile including band bios, music and social media links. Then they can proceed to search for available gigs by location, date, venue or company. Likewise, bookers can browse artists who have checked the “interested” box on the available gigs that they’ve posted.

This “interested” checkbox feature is one of the site’s latest additions and allows for artists to check off that they’d like to play a certain gig. From there, bookers can view the interested bands and reach out to a select few; saving artists from tiresomely sending inquiries to every promoter they’d like to work with, often in vain. With this feature, promoters can also expect to receive more interest in what they post, since bands no longer have to make the first move in communication.

“It’s a lot of work for artists to try and understand which people are the right points of contact for the right shows they’d want to be a part of, at the venues in the regions they want to play in,” Bahia said. “[Artists] would likely browse event calendars at venues they like, call, Facebook message and email the venue hoping to hear back, and repeat the process as they slowly get in touch with people who would be interested in them; it’s difficult because there isn’t any common standard for them to work together at the moment. Facebook and phone calls is probably 90% of that communication at the moment, but Facebook wasn’t built for booking events.”

MusicIDB cuts out those tedious and inefficient extra steps and links artists directly to venues in their selected area that they want to play in; this time around with no fees. Previously, bookers would have to pay a fee to message interested bands, but now basic accounts are free and more resourceful for both parties.

“It’s a decision based on what we are choosing to be, and what we are choosing to represent,” Bahia said of the site’s decision to drop fees. “As far as how can we afford it, honestly we’re willing to absorb the costs we accrue as we grow until such time that we have, A) a loyal and impressive user base and B) a convenient add-on for our power-users that they would be happy to pay for.”

The rebranded site will eventually offer paid premium subscriptions that allow bookers to sort artists by number of likes and message large amounts of artists at once (for example, by genre). Basic accounts, however, will remain free on the new site.

“I think of it like this – each website on the internet is a road, and nobody wants to drive on roads with tolls if there’s a near- equivalent option that won’t cost them money,” he added, referencing how texts, emails and Facebook messages are already free and available for artists to use when booking gigs. “It just doesn’t click to suggest we can charge people for what they haven’t been paying for and doing all along.”

Prior to the site’s rebranding, Massachusetts rock band Milo Bigwig used the site to connect with Fleming Entertainment Enterprises, which would eventually lead them to the finals of The Last Band Standing competition in Massachusetts.

Had a great time at LBS the other night. Thanks to @MusicIDB and @FlemingEnt. It wouldn’t have been possible with you guys!#livemusic

“After booking a slew of Boston gigs with us, Fleming Entertainment suggested we would have a good shot in the Last Band Standing contest,” Nick Moreira, guitarist of Milo Bigwig, said. From that gig alone, the band received a major boost in local attention.

Milo Bigwig, who learned of the site from fellow band and club owners, said that it has been a major part of their expansion into the Boston music scene.

“Being from Swansea, M.A. we would play all the Providence clubs. As every band does, we eventually wanted to explore some new territory,” Moreira said. “We used MusicIDB as our biggest resource in connecting with the Boston scene, a scene that was foreign to us. That’s really what a music community should be about, connecting with new people as well as musicians.”

Moreira explained the site works as a domino effect that eventually connects similar local bands with promoters and club owners acting as the handy “middle men.” Most importantly, the site removes any guesswork from the booking process, stating explicitly what each club is looking for in an artist for every specific gig.

“The best part about the site is you know where the gig is, when it is and what it is before you even contact anybody,” he said. “Without MusicIDB, a local artist is usually guessing when contacting a club. We wouldn’t know when or if they have any openings, what the pay is like.”

The loyalty to the site that Bahia hoped to develop has already sprung in Milo Bigwig, who doesn’t feel they need to look any further than MusicIDB in the future when it comes to future booking.

“We have never used another site similar to MusicIDB, and don’t see why we would need any other site,” Moreira said. “MusicIDB is very good at what they do. We owe a lot to them.”