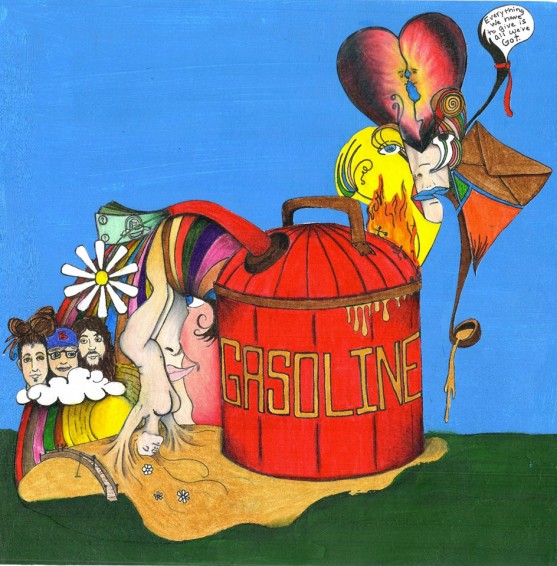 I first saw Hayley Jane & The Primates at Discjam Festival in the summer of 2014.  While the band’s music is something you might think of as mellow, I would describe the performance happening on stage that day as completely electrifying (the entire set can be watched on YouTube here).  Needless to say, they stood out very much that day, and I made my way out to their CD release show at Atwood’s tavern in the fall of the same year.

The show at Atwood’s was no disappointment, even in a crowded tiny bar, the music was uplifting and energizing.   I purchased a CD directly from Hayley for 10 bucks.  It’s a nice jacket-sleeve, full-artwork driven item, which has come to almost fully replace the old plastic jewel case that was the standard in the 90’s.

The genre-blend in their music on this album includes folk, jazz, showtunes and various rock styles.

Gasoline by Hayley Jane & The Primates – “Must Hear” Tracks

Zen Game is exactly the kind of track that each time you hear it, you start wanting it more and more.   The lyrics “release this strong-hold on what’s inside, just let that horn blow, and I’m gonna make you smile”, grow from one chorus to another, and by the 2nd or 3rd chorus, it erupts in a clean and beautiful hollar of a vocal melody.

Track 4 – Ruled Out – “Daddy won’t you let you hair down, like you’re moving in slow motion”

Aside from the fact that the song is uniquely interesting because the verses and chorus are at completely different rhythms, it also comes across as unique because of that lyric above, which to me doesn’t seem like the kind of statement you normally hear from a woman singing about a man in a song.

There’s also a great dynamic between the reflective versus, which consider the various ways an ex-boyfriend and ex-girlfriend can maintain a connection (which are basically all “ruled out”), and the chorus, which hones directly in on the lament and desire for that person, who is no longer available.  That chorus melody, full of angst, really makes this song something to listen to.

This song reflects on the relate-able struggle of life as an artist.  The lyrics play nicely as a blend of artistic metaphors mixed with cold hard facts, and the melody maintains a genuine connection to the point.  Even though it’s a song about being sad and life being tough, it’s actually one of the most upbeat songs on the album.  Another example of the consistently mold-breaking efforts by Hayley and the Primates.

Track 10 – The Right – “Alright your heart, needs a home, fine you can stay but just leave me alone.”

This one is a perfect example of a songwriter and band who know exactly how to work with dynamics to make a song amazing.   The song is theater-esque, it’s a ballad, it’s a narrative, and it’s emotional.  It’s one of those songs that do a bit of a breakdown-chorus, using vocal filters which when used correctly, give the song an interesting texture.  There is also a really sexy guitar solo on this one.