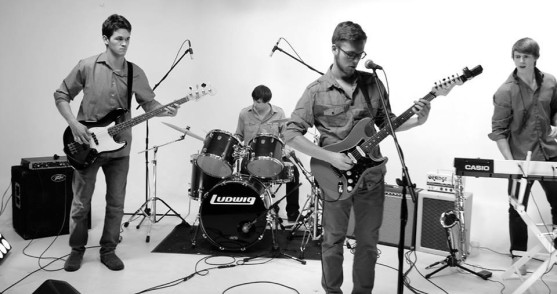 “Carried Away”
Performed by  Dionysia
Written by Dionysia
Year of Release: 2014

Dionysia is an Alt. Rock band from Burlington, VT.

What’s this song about and what was the inspiration?
“This song is about embracing the struggles of everyday life with passion and vigor, not only dealing with them but conquering them and moving forward onto greater things. The song encourages the listener to reject the bars and chains of modern society and go beyond, achieving a transcendent happiness and excitement for life.”
Who wrote the music / lyrics and what was the creative process on this song?
“Garrett, our guitarist, wrote it on a curb in Dublin during a term abroad. We fleshed out the song as a band, and it took its final form during our pre-production process with Anthony Santonocito of Westfall Recording Company NY.”
Where was it recorded and who was it produced by?
It was produced by Anthony Santonocito of Westfall Recording Company NY in the fall of 2013, during our fall terms of college. This required Garrett and Alex (singer and drummer, respectively) to take public transportation to Long Island from Boston, as well as Will (bassist) to drive from upstate NY and Julien (saxophonist, keyboard player, and vocalist) to fly from Ontario.
Where does this song fit in your live act?
here does this song fit in your live act (opener, solid middle, closer/encore)

This is often the fourth or fifth song of the set, when we are allowing the energy of the music to slow down slightly before we bring it back into our more energetic (non-acoustic) songs.

Visit Dionysia’s page on MusicIDB.com to learn more about them.

The band is also nominated for a New England Music Award. Click on this link to vote for them.