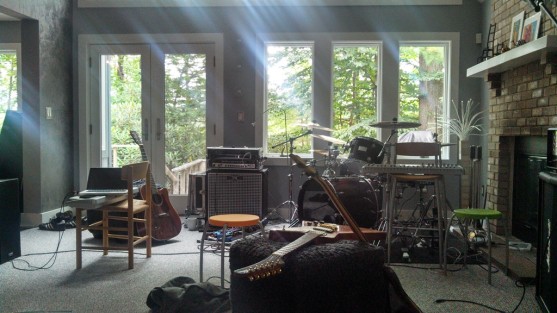 So recently we’ve recorded a single called “Nothing left to Hide” and you can find that on any one of our social media websites. We have an EP being released soon which is a little more on the heavy and emotional side, so we wanted to write a single that was a little more fun, upbeat, and “dancey” as we like to say. That’s a big element of our sound which want to retain as we progress as a band. We want to write music that can be aggressive, heavy, and passionate, but still have some fun and danceable qualities to them. There are a million bands already using guttural vocals, double bass, and blast beats for an entire album, and even though we listen to alot of that music ourselves, we want write and perform music in a way that no else does. It’s tough to describe our sound especially since we’re still discovering it ourselves, but we combine melodic vocals, screams, break downs, catchy chorus’s, EDM synths, and symphonic elements to make music that can reflect every emotion and moment in life. We pride ourselves on our live shows and always deliver a performance that matches the intensity and energy of our music.

We spent this past weekend tucked away in the Pocono mountains really fine tuning our new EP. It’s a bit of a concept album based off the poem “The Wasteland” by T.S. Elliot. Without going to great detail, the story of the wasteland is written in a fragmented format, through several voices and view points, referencing other literary works from different time periods, and embodying a few central themes. It is written in such a way that allows each reader to form their own interpretations, and that’s what you’ll get from us…not an album about the wasteland, but an album about our interpretation of the reading. Those who love to find the references and influences of a band will be able to through the lyrics, instrumentation, meter, and flow of the music. The best part is, you don’t have to have ever of heard of T.S. Elliot to be able fully appreciate the songs, they stand strong on their own. We will be headed to Bridge Sound and Stage in Cambridge MA next month to begin recording this album which we believe will truly believe define our sound.

You can hear a sneak preview at the start of our first live video, which we just added to our YouTube channel: www.youtube.com/courageincollapse