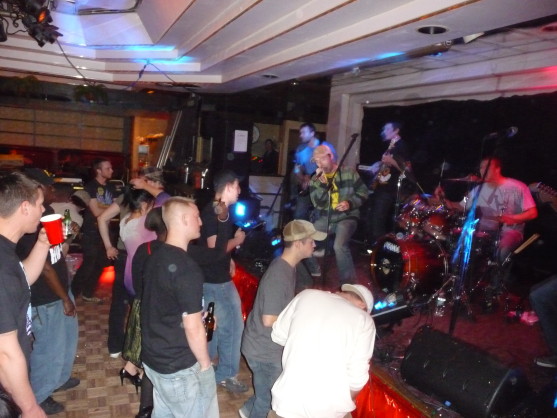 I’ll tell you a little about my past and how MusicIDB.com (originally AristBomb.com) came to be. 2004 – Despite everyone at the New England Institute of Art promising that it’s almost impossible that you would end up working on anything interesting or with anyone extraordinary, I found that it was basically the opposite should you be willing to work as a stagehand.  Working originally for Clear Channel and later for IATSE Local 11 Stagehands Union, I had the privilege of setting up equipment for alot of the artists I had always looked up to including Rolling Stones, Paul McCartney, Red Hot Chili Peppers, Aerosmith, Nine Inch Nails and so on.   I once painted the Orpheum stage, which seemed crazy to me then, and still seems crazy to me now. 2007 – Aces Ashes was the band I was in, and I will never forget our CD release party.  I don’t think we had ever really booked a show ourselves before this one.  The venue was this great room at the Lo Kai in Dracut which has a big side stage and great atmosphere and the show boasted local groups Electric Donkey, Market Zero, Jaded, Ever Fading, Disorder by Design and us.    With the help of the overly pre-planned strategy of the band’s drummer Craig Proulx and this magic lineup, somehow there was a line out the door for what seemed like an incredibly long time – and they just kept coming!  I had worked so many local shows and I had never seen anything like this.

Despite the fact that Electronic Donkey’s set was stopped by police after they’d only performing 3 songs (and because of a misunderstanding about what time the venue could have live music playing until that I take personal responsibility for), the show was an incredible experience. Beneath The Sheets at The Lo Kai in Dracut

2008 – After that first Lo Kai show, it was obvious, put on a show, and there will be hundreds of people paying to come.  That turned out not to be an exact science, and after booking 5 shows at the Lo Kai I also began to realize that I wasn’t getting a very good deal.   I was spending hundreds to rent a sound system, setting it up myself every time, running it myself, and also giving a fair amount of money to the Lo Kai to rent the room, while they were also taking 100% of the bar.   In hindsight, a more experienced event promoter would have negotiated a better deal.  Nevertheless, the door cover collected from show-goers wasn’t enough to split between the bands and have anything reasonable left.   Plus I would spend hours booking the show, finding the bands, talking and emailing with them, then I would spend hours designing the poster, printing the poster, hanging the poster around local spots and promoting online.   I discovered that another venue Gemstones, 2nd floor of a bar called the Blue Shamrock, had a built in sound system, and that was going to make a huge difference in the level of effort I had to put in to make a show happen. Nick Petrakas, the owner of Gemstones said I should talk with Mike Dion who was going to be doing the booking there.   Mike and I hit it off pretty good and I became the sound engineer for his shows, and I took some of the open dates in the calendar that weren’t being booked by his new company Emerald City Productions.  We were featured in the local paper on the front of the entertainment section with a big picture and it was looking like we’d be riding the gravy train.

The shows that Mike booked featured incredible bands, the only problem was, they were often not from the immediate area, and on some occasions, there weren’t a lot of people coming out.  There were a number of contributing factors, including a less than wonderful reputation of the type of bar the downstairs spot The Blue Shamrock used to be.   There was some tough nights and the owner made it clear when he was not happy.

It was during this time that I started to understand the magic potion, in order to pull off a show you have to have bands that draw, and bands that draw in small stage venues are usually popular, local bands.   Four popular bands from the next state over doesn’t work, neither does four local bands who aren’t popular.  After a while, I  could tell the owner very realistically how many people would be at each show in advance.  There were certainly times I was off, but there is something solid about those factors that can tell you what to expect.

2010 – In trying to be accurate, I just traced the creation of the first ArtistBomb logo to October 24th, 2010.  The main intent was that MusicIDB.com will be the easy way to keep track of all the different shows, artists, contacts, contracts, in a dynamic user-built database.   It will be simple to not only calculate draw, but to record draw for past events, to really give people who book shows an easy way to know their options and put on the best possible events they can.  When someone creates a listing of an event, tagging the artists and the venue then the event calendar on all of those artist pages as well as the venue page needs to be automatically updated.    People need to be able to promote their show easily, with their own voice, but be working off the same core event.

One Response to Why MusicIDB.com was Created