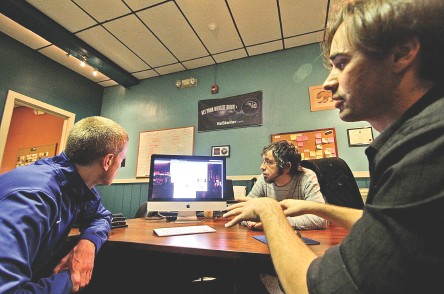 This material is from the Lowell Sun Interview with MusicIDB.com written by Pete McQuaid

LOWELL — Brian Bahia knows the music industry. And he’s tired of how inefficient it can often be.

“We want to save time,” said Bahia, a Chelmsford native and UMass Lowell graduate who’s done everything from working backstage to booking shows. “It’s so much work to book a local band showcase that you get burned out just by managing and interacting with the bands.”

Last month, Bahia and his five cofounders launched MusicIDB.com from a one-room office on Lawrence Street. MusicIDB is an integrated live-show marketplace designed to streamline the process of finding and booking local shows for promoters, artists, venues and fans.

The site allows venues and promoters to display available performance slots for upcoming events. They can set up the contract agreement (which can include show times, how cover charges are split, or even whether the bands get a free dinner) and then look for possible bands through the site’s detailed search engine. The promoter or venue can then check a band’s page to find out more about its social-media presence or to listen to its songs via SoundCloud.

The venue can even use MusicIDB’s “genie draw calculator,” a tool powered by an algorithm that estimates how many people a band would draw to a particular venue. According to MusicIDB’s business-development executive, Mitch Candiano, who’s worked as a local promoter for more than a decade, it’s accurate.

“Last weekend, we booked a show at Gemstones and it was pretty much exactly what the calculator had said,” said Candiano. “It was eerie.”

The pages on MusicIDB for artists and venues are wiki-based, meaning anybody can edit them. Artists and venues can “claim” their pages (through a simple verification process that takes about half a day), allowing them to be able to send and receive messages about gigs through the site’s messaging system. The service is $30 per month for venues, but it’s free for artists and fans.

“We want to make a really simple marketplace where you can expect to book a show in half the time it would have normally taken you,” said Bahia.

Cofounders Bahia, Candiano, Doug Quatrocchi (chief operating officer), Greg Gervais (sales director), Johanna Lovejoy (marketing coordinator) and Daniel Shedd (lead developer) spend their days building up the website and reaching out to local artists and venues to get them to claim their pages. They signed their cofounders’ agreement in November 2012 and plan to secure outside financing within a year.

Alex Bromberg, a booking agent for Seismic Entertainment, has used the site for a few weeks to book shows for his bands Leaders Led and The Last of the Independents. Though he admits the site is still building up its collection of claimed pages (44 as of last Saturday), he said he uses it more every day and that he’s already seeing an impact on the way he does business.

“It’s literally exactly what I’ve been hoping for,” said Bromberg. “The other websites like Sonicbids are good for specific, unique events, but that’s not really the local scene. Most local shows are ones that happen multiple times every weekend, so this has been great in helping me fill last-minute slots.”

MusicIDB invited Mike Homewood, who promotes shows at The Smokehouse Tavern in Lowell, to the office to sign up for an account Thursday afternoon. In less than half an hour, he had signed up as a promoter and artist under his stage name, Mic Stylez.

“When I’m booking a show, I have to go on 20 different Facebook pages and try to find contacts that way,” said Homewood. “This is more of a one-stop shop, and I definitely see the value in it.”